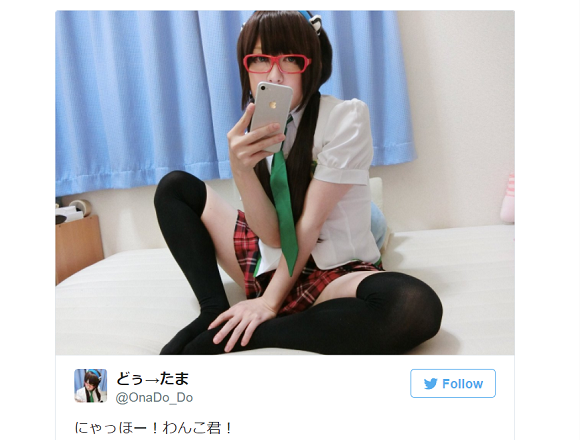 Not so long ago, being a cosplayer meant you could achieve, at best, local fame. While there’s a lot of talent and effort involved, cosplay was just too niche of a pursuit to warrant much attention from major, mainstream media outlets.

Social media has changed all of that. Any costuming enthusiast with a camera and an Internet connection can quickly and cheaply post photos for anyone in the world to see, appreciate and share with others. So even though cosplayers haven’t achieved international movie star-levels of recognition, the more popular ones can earn fans from around the globe.

Such is the case with Japanese cosplayer and Twitter user @OnaDo_Do, whose vague self-introduction includes “Seems to be a salaryman who dresses up as a woman.”

@OnaDo_Do’s penchant for revealing outfits and provocative poses have helped the cosplayer rack up over 25,000 followers, including admirers from overseas. Based on interactions with them, @OnaDo_Do recently sent out the following tweet comparing the behavior of Japanese and foreign fans.

“The only kind of messages I get from Japanese people are dick pics and people saying ‘Let’s have sex ^^.’ But from foreigners, I always get messages like ‘You are incredibly sexy. I love you. You have the most beautiful eyes, and from the other side of the ocean, I’m praying that they’ll always keep shining. Good night, my beloved.’ For a moment, they almost make me swoon.”

Given that dick pics are, by no means, strictly a Japanese phenomenon, it would seem that the discrepancy is less a manifestation of national character, and more a function of the specific individuals that make up @OnaDo_Do’s domestic and international fanbases. There’s also the chance that the cosplayer is merely trying to play to the crowd by giving foreign fans a feel-good shout-out.

Still, in any case, this serves as a good reminder that, regardless of what country the person you’re corresponding with is in, he or she probably doesn’t want to be given an unsolicited snapshot of your junk.