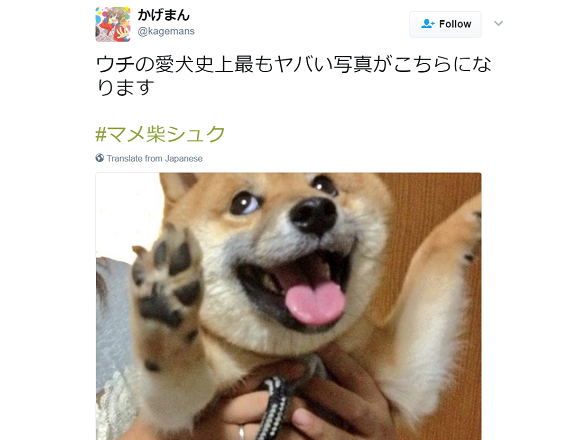 The self-satisfied Internet star is back, and this time he’s happier than ever.

There’s a little extra spring in Japan’s step this week, thanks to the string of holidays collectively known as Golden Week. In a society where unpaid overtime and mandatory drinking sessions with coworkers are common aspects of working life, a few days away from your professional responsibilities can do wonders for your disposition.

Of course, that’s just the human population of Japan we’re talking about, right? For pets, Golden Week shouldn’t feel markedly different from any other set of seven days, since it’s not like they’re punching in at the office during the rest of the year anyway.

And yet, this shiba inu seems to feel that Golden Week is worth getting very excited about anyway.

“This is the most awesome photo of my dog ever,” tweeted Japanese Twitter user @kagemans with the photo of his pet pooch, named Shuku. The dog’s expression of unbridled joy isn’t the first thing to win him online fame, as @kagemans’ pet also became an online sensation in 2015 for posing smugly with his new pee pad.

This time around, comments from Shuku’s online admirers included:

“Shuku is a comic genius.”
“His eyes are off doing their own things.”
“His tongue looks like a heart!”
“I was feeling down, but now it’s like all my troubles have been blown away.”
“Stupidly cute (and I mean that as a compliment).”

Given Shuku’s past history of positive-vibe poses and expressions, it’s possible that there’s no particularly deep significance to his delightfully dopey smile. Then again, maybe he realizes that some of his canine brethren are out there working like dogs, and so it’s important to cut loose when and where you can.